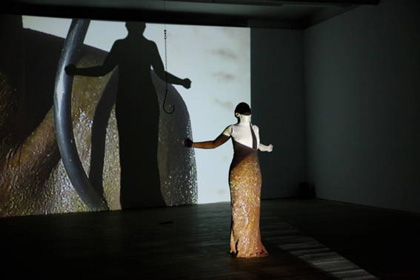 In 2012 SU-EN Butoh Company celebrated 20 years of artistic activities!
The company was founded in Tokyo in 1992, after SU-EN received her name from Tomoe Shizune-sensei through the performance Kaze no Cho produced by Tomoe Shizune & Hakutobo at Tiny Alice, Tokyo.

The 20 years was manifested through an art exhibition at Uppsala Art Museum – Visceral Space. Several rooms were designed by SU-EN and collaboration partners and filled with installations based on some of the company’s major pieces and projects. About 6.433 visitors came to see the exhibition!

SCRAP OPENING EVENT
On the opening night we made a Scrap happening with our old collaborators Skrotcentralen i Uppsala AB. Score by SU-EN and the participants:

In the evening at the castle, we had a big party and many colleagues and friends participated. Some also shared performance works with us: Stuart Lynch, Joan Laage, Milos Sejn, Johannes Bergmark, Cassius Åkerlund, Irma Optimist and Sören Runolf. Toastmasters were Hans T and Gilles Kennedy.

The catalogue is available for free and may be ordered at info@suenbutohcompany.net

All ended with the official ending ceremony with drinks.